The Four Steps of Creativity

I have been busy working on my creativity , I have been in Preparation  and Incubation while waiting for Illumination and am about to start Implementation . 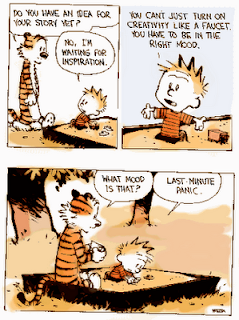 Ira Glass on the Creative Process

The Four Steps of Creativity

We’ve known for a long time that the creative process can be broken down into four distinct processes, most of which can be fostered and augmented. The processes are:

I’ll spend some time on each step.

This is the first phase of what most call work. A writer, for example, prepares either by writing, reading, or revising earlier work. A musician plays scales, chords, or songs…a painter messes with paints or visits an art gallery…an entrepreneur researches problems to solve….a programmer plays with code.We photographers must do all the above , visit museums , read books , play with code and most of all research and shoot .   In each example, the creative is going through relatively mundane processes.
The reason I say most call this phase “work” is because these processes may or may not be inherently enjoyable. They’re also fairly mundane and tedious, but the creative has learned that this process is necessary to plant the seeds that lead to…I love this part it’s where the fun begins for me .

This would be the mystical process if there were one because you often don’t know that you’re percolating an idea, or if you do know you’re working on one, you don’t know when it’s going to come out. It’s at this phase that your conscious and subconscious mind are working on the idea, making new connections, separating unnecessary ideas, and grabbing for other ideas.
This is the phase that most people mess up the most with distractions and the hustle and bustle of daily lives. Modern life, with its many beeps, buzzes, and distractions, has the strong tendency to grab the attention of both our subconscious and unconscious mind, and as result, the creative process stops and is instead replaced by more immediate concerns.
However, from this phase comes…

This is the “Eureka” moment that many of us spend our days questing after. When it hits, the creative urge is so incredibly strong that we lose track of what else is happening. The driving impulse is to get whatever is going on in our head down into whatever medium it’s intended to go.
The most frustrating thing for me is that the “illumination” moments happen at the most inopportune times. They invariably happen when I’m in the shower, when I’m driving by myself, when I’m working out, or when I’m sitting in mind-numbing meetings that I can’t get out of. Of course, the bad part is as I said above: the impulse is to get the idea out as soon as possible, so it’s not at all uncommon for me to stop showering, driving, or working out and run to the nearest notepad – and, in meetings, I start purging immediately anyway. I’ve yet to gain enough clout to excuse myself from the meetings, but I’m working on it.
I was speaking to a friend a few weeks ago, and I told her I was frustrated because I was pregnant with ideas and didn’t have time to get them out. Keeping with the analogy, when a Eureka! moment hits, it’s much like labor – you’re done with incubating, and it’s time for…

This phase is the one in which the idea you’ve been preparing and incubating sees the light of day. It’s when that written piece comes out, when that song flows, when that canvas reveals its painting, and so on. It’s also when a good creative starts to evaluate the idea and determine whether it’s good or not – but only after they have enough to see where it’s going.
Most of the creatives I know or work with get really frustrated with others at this phase. Other people only see the creation at the end – they don’t recognize or care much about the process that generated that idea. This is especially true with some supervisors and bosses or clients  who expect the end product on a certain schedule – the process does not work that way. Creatives know that for every good idea, there’re at least a few that don’t work out, but they can’t know ahead of time what’s going to work out and what won’t.
The creative process begins with work and ends with work. The take-away point here is that creativity is not just percolating and Eureka – it’s percolating and Eureka sandwiched between work.

Understanding the creative process helps you start figuring where your bugs are. My contention here is that everyone is capable of creative thought and originality, but some people are more creative because they’ve learned either how to let their process work or how to augment the creative process. Everyone else short-circuits their creative process.
Intelligence and creativity are loosely related – some really intelligent people are not very creative, and some creative people aren’t all that intelligent in the way that we standardly view intelligence. Creativity favors intelligence, but that has almost everything to do with two facts: 1) the more intelligent creative can prepare more quickly and more broadly than the less intelligent creative, and 2) the more intelligent creative generally has managed to secure employment that allows here more autonomy of her schedule.
In case you want numbers, most psychologists conclude that people with an IQ of 120 or above have plenty of potential to pursue creative thinking and lifestyles – under that, they’ll struggle. There’s also very little correlation between education and intelligence, so don’t think you can’t be creative because you didn’t go to college or grad school – some of the smartest people I know never attended college. look at Steve  Jobs for example .
In my experience and work with others, the two areas most people mess up their creative process is in the first two steps. Part of preparation is working on things that interest you, and most people haven’t really sat down and figured out what interests and motivates them. This is especially true since our culture both exalts creatives and hates them at the same time and a lot of people haven’t found their creative outlet. They either think they’re not creative or that creative pursuits are a waste of time.
Another area in preparation where many people go wrong is by not being aware of how social the creative process is. Few great ideas come from a person sitting and thinking by herself – true, that’s part of the incubation phase, but the seeds are planted in the preparation phase. Talking to people interested in the same things you are or who are just plain creative helps you become more creative, and this explains why creatives tend to be attracted to areas with a high density of other creatives.
Also, as I discussed above, many people don’t let their ideas incubate. Creatives throughout history have always spoken against working for someone else because doing so has a tendency to stop your own incubation process – when your boss tells you to change directions on a project or reassigns tasks, your incubation process is stunted. Additionally, when you don’t understand that your well-being (and employment) depend on your ability to leverage your creativity, you’re less likely to take this important part of the process seriously. Hint: that you work for someone else has little to do with your creativity or the fact that you are employed due to your creativity.
With these two phases of the process short-circuited, it’s no wonder why people aren’t manifesting their creativity. It’s not because they don’t have the capacity to be creative and has everything to do with their creative process being buggy. Fixing the creative process is not that hard to do, and I’ll talk more about it in future posts.

Here’s something I want you to keep in mind and it’s why I’m so adamant about you understanding your creative process and that your livelihood depends on your leveraging your creativity: all it takes is one or two good ideas, well-executed, for you to live the life of greatness. Most of the influential creatives throughout history – including present ones – started with one really good idea. The rest of their life was spent either working on that idea or living off of the fruit of that idea. You may be incubating that great idea, or you may be one step away from it, and I want you to get it out so we all can enjoy it.

I ask that you suggest new themes and future topics..