MARIA ANADON IS BACK WITH HER NEW JAZZ ALBUM: «SMILE»
My friend and client Maria Anadom just released her new Album “Smile ‘” I had the pleasure of working with Maria on this our fourth Collaboration. 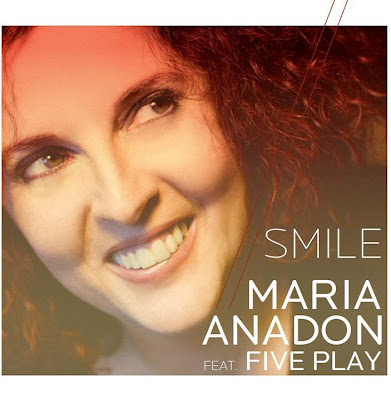 Prepare yourselves for a journey through the Great American Songbook’s greatest classics, from Cole Porter to Thelonious Monk, from Rodgers & Hammerstein to Peggy Lee, with all the charm of traditional vocals and a new life for worldwide known songs, through Five Play’s stunning contemporary arrangements. «Smile» has just been released in Portugal and will very soon be available internationally via iTunes.

Besides “Smile”, Maria Anadon’s new album includes classics like “So In Love”, “These Foolish Things”, “I Love Being Here With You”, “It’s Alright With Me”, My Favourite Things”, “What is This Thing Called Love”, “Misty” or “Love for Sale”, revised through USA jazz band Five Play, regular ‘accomplices’ of the Portuguese singer for more than 10 years now, both in studio or in live performances.

As critics have already stated, after their advanced listening and on the CD’s liner notes, «Smile» finds Maria Anadon at yet another peek of her vocal and performing gifts. In fact, complementary to her solo career, she is currently even sharing, as a founding member, with vocalists Maria João and Maria Viana, the live project ‘Vozes3’.

Musical and Jazz festivals producer and DownBeat magazine collaborator Paulo Gil states that “Maria Anadon’s new album is truly a big smile, a mature, aware and honest one. She is an expressive communicator, melodically inventive, with a particularly fine-tuned voice and a firm grasp of her swing and phrasing. She knows how to respect tradition and put colour and creativity in the lyrics she voices. Never loosing the notion of route and content of the songs she makes hers, Maria Anadon knows how to stand out from a jazz sextet where her voice is constantly challenged by musicians of remarkable level.”

In the same booklet, jazz blogger, investigator, author and producer João Moreira dos Santos goes even further and states that Maria Anadon’s «Smile» “is indeed a landmark, setting a new frontier of ambition and excellence in Portuguese jazz vocals.”

Ricardo Belo de Morais, presenter of Radio Europa Lisboa’s Saturday night show, “Jazz Voices”, wraps up saying how he has had “plenty of choices when it comes to thrilling, competent, professional, brilliant and gifted voices, as well as those who have a natural instinct to cater for what audiences need and expect from them. However, very few of them are able to gather all these characteristics into a solid, seductive and reliable unit throughout their careers. Maria Anadon has been one of those selected few.”

All in all, with «Smile», Maria Anadon manages to put forward a ‘full house deck of cards” in a way few female vocalists can ensure: she approaches the classics in such a unique fashion that she is able to both capture the attention of Jazz’s strictest critics, academics and investigators; but also captivating general audiences who look for the language of love, the energy of rhythm and the seduction of the greatest songs under the work of the greatest international voices.