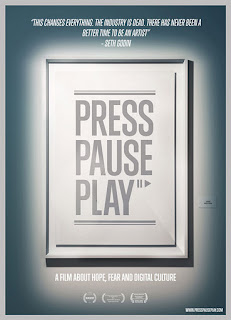 I discovered this documentary this morning and I had to share , there is so much to think about .
The digital revolution of the last decade has unleashed creativity and talent in an unprecedented way, with unlimited opportunities. But does democratized culture mean better art or is true talent instead drowned out? This is the question addressed by PressPausePlay, a documentary film containing interviews with some of the world’s most influential creators of the digital era.

We’re at an artistic crossroads, says the documentary Press Pause Play. Technology means it’s never been easier to create, to push out a little piece of oneself and share it with the world. But that ease has created a landscape where the haystack is gigantic and the needles still relatively sparse. The idea that technology can be both a blessing and a curse is familiar territory, but hearing it from people whose livelihoods both depend on and are threatened by that dichotomy—well-heeled Moby notwithstanding—is a welcome reminder that it’s not just an abstract talking point. It’s the way we live now, artist, enthusiast, or other

PressPausePlay from House of Radon on Vimeo.