UK ‘s Digital Photographer Magazine  invited me to share my Techniques with its readers in there segment – STORY BEHIND THE STILL  it is with great enthusiasm that I accepted there invitation  with a Image of my muse Katy  from our series Free Falling . You can purchase Digital Photographer Magazine in all Major book stores and news stands around the globe . click on the image to see how I took this Image. 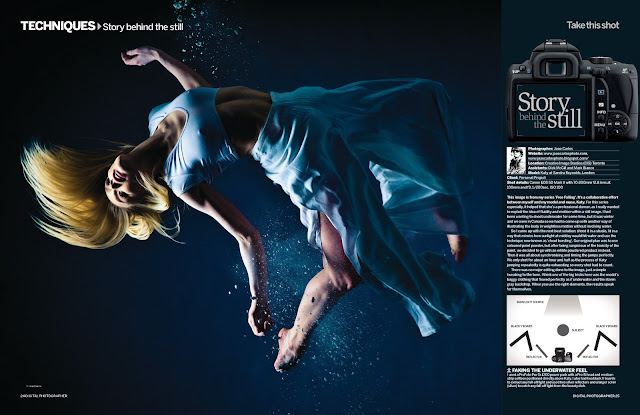 Story behind the still:
This image from my series “Free Falling” is a collaborative between my self and  model & muse Katy . The chemistry we have on set is amazing and I can honestly say I create my best work with her. For this series especially it helps that she was a professional  dancer for most of her life . I have been wanting to shoot under water for awhile , but it was winter and we were in Canada .
So I came up with the next best solution , shoot it studio ,our original plan was to use coloured paint powder, but after being suspicious of the toxicity of the paint (!) we decided to go with an edible powdered product instead. Katy was demanding we use the coloured paint right up until she got a ton of it in her eye and swallowed around 2 kilograms… Then it was all about synchronizing and timing the jumps perfectly . We only shot for about a hour and half , the process of her jumping is exhausting so every shot has to really count , I did not want to let her down , we used a simple technique  to stay in sync . I counted one , two and she jumped at three . the results  speak for them selves .

My Set up was  simple, I used a Prophoto 3X4 SOFTBOX directly above her , also used two black V boards to extract any fall off light I also used two Wescott  reflectors  a 5 in one utilizing the  silver side and a larger scrim Jim , silver also  to catch any fall off light from the Beauty dish.  My camera choice  was the Canon 5D Mark II  and the lens used was a  70-200 2.8 L. Since this is a heavy lens, I used  “Eddie”from  “3 legged thing” tripods to help keep my images sharp by limiting the movement of my camera.
I shot Directly on to a  Sandisk Extreme Pro CF cards. I prefer too shoot to card instead of tethered  if i dont have to . There is no major editing done to the image , just a simple image tone , I think the big trick here to make this look and feel like it was shot under water is the models baggy clothing that flowed perfectly and the storm gray backdrop that had some humidity issues helped create the effect.