Back in march I had an opportunity to shoot  , Portuguese Olympic medalist Francis Obikwelu and my good friend  and tri-athalete Bruno Brito .
This  years 2012   London Summer  games have just finished  ( well back in August ) unfortunately Frances Obikwelu  suffered a injury. Leaving him unable to participate . I was lucky enough to have an entire ten  minutes to shoot with him during one  of his training  sessions.
When photographing  world class athletes , like any other public figure or celebrity you have very little time to shoot  usually . The logistics in a shoot like this are almost always very complicated  and this was no different, there are always multiple factors that are at play  for example  , That day I shot Francis , Bruno and Portuguese strong man Marco Forts who was in  London at the  Games competing  in the shot put  event . I will dedicate another post to Marco Forts shoot  in a couple of weeks  . (stay tuned )

Working on location is always a challenge: There is not enough time. There is not enough space. There is not enough light. Sentences you find your  self repeating over and over when shooting on location .  The logistics of the day where quite complicated at one point I had confirmation to shoot all the athletes , but I did not have authorizations of all the Locations , when I finally secured a great location two of the athletes  could not shoot  there and at  the  best time slot for what  I intended , but in any situation   like this you must always be flexible  have a plan B and  plan  C  , and try  to be prepared for the unexpected  but most of all be flexible and keep it simple . My back-round was a great wall on the side of the building , I love the texture and color it was exactly what I wanted before I even new what I wanted .

So to keep it simple , for starters I rented my lights  from PG PHOTOGRAPHICAS  in Lisbon , its a great   Rental SERVICE ran by a wonderful German photographer , who has  just about everything you need need on a shoot  and if she doesn’t have it  ,I recommend  sending them a email asking for quote and availability on gear or if you have any special requests, They mostly carry Profoto  like most other major rental places that I have worked with. They also have Westcott Scrim Jim’s and reflectors.
I am already familiar with the gear so its like owning my own but without having to travel with  it and pay all kinds of over weight  and travel expenses  plus the extra where and tare the gear undergoes when traveling . So when I can I  like  to rent .

I  kept my options   portable  I used Profoto Pro-B3 1200 AirS  with two Pro Heads ,  one head with Westcott 7′ Silver Parabolic wich creates an amazing beautiful light  at a  affordable price , the other strobe used had a  Profoto  Zoom Reflector.

I shot directly to Sandisk CF Extreme Pro 64GB cards . The Cards are super fast and extremely  reliable. I prefer to shoot to CF card direct instead of tethering when I can , I feel shooting to the card  keeps my shoot quick and gives me a better flow with my subjects . I do however use a  3 Legged Thing TriPod and a  Canon remote  switch rs-80n3 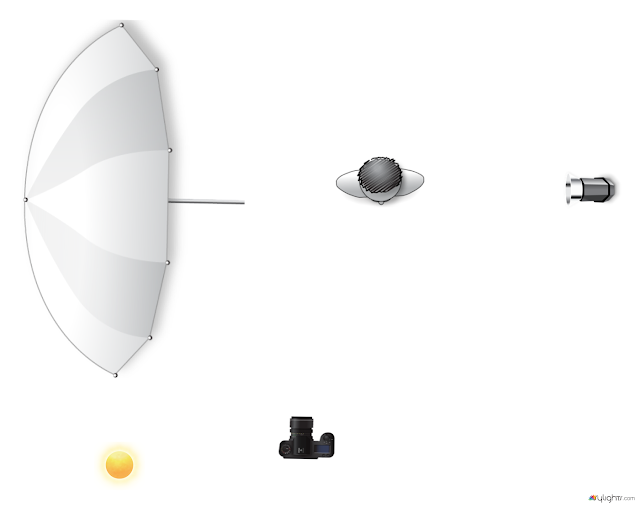 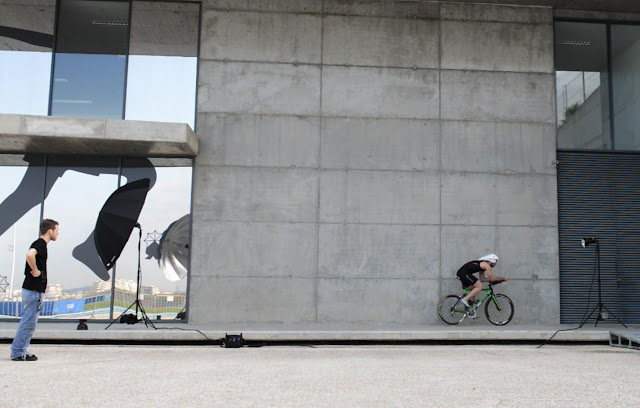 The next series of images are taken at the same location , Bruno my subject is a tri- athlete so I wanted to  shoot  him  doing at-least  two of his sports . We used the track and I littrelay laid down on the floor and had him jump over me like twenty times , until I finally  got what I wanted .
I used the same Profoto lights but this time , one light is placed behind my subject to give him some rim and the other light is my main light directly above me  . In post we cleaned the image of all and any distracting objects in the Image , such as building and other athletes  training on the track. We pumped up the contrast and sharpness of the image . That give the images a great dramatic feel. 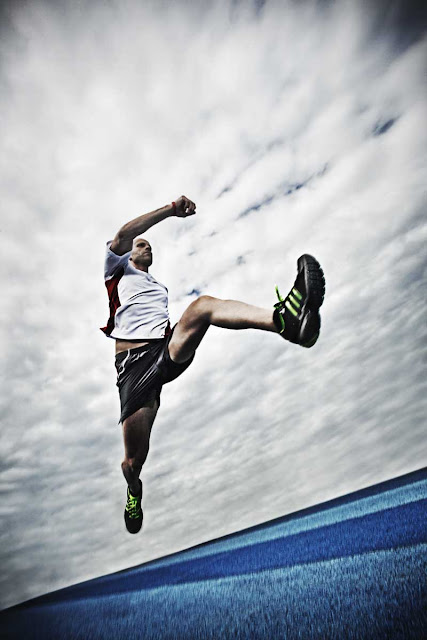 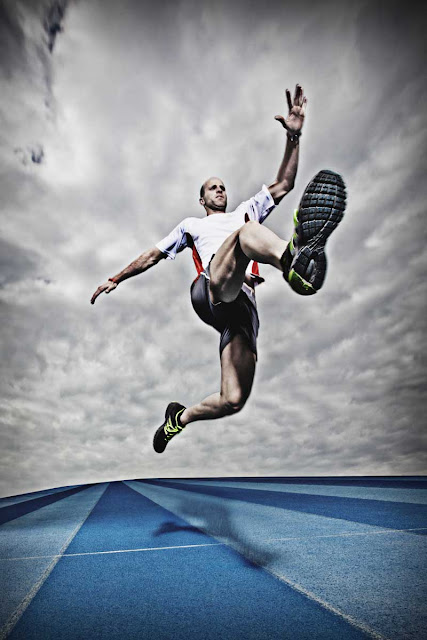 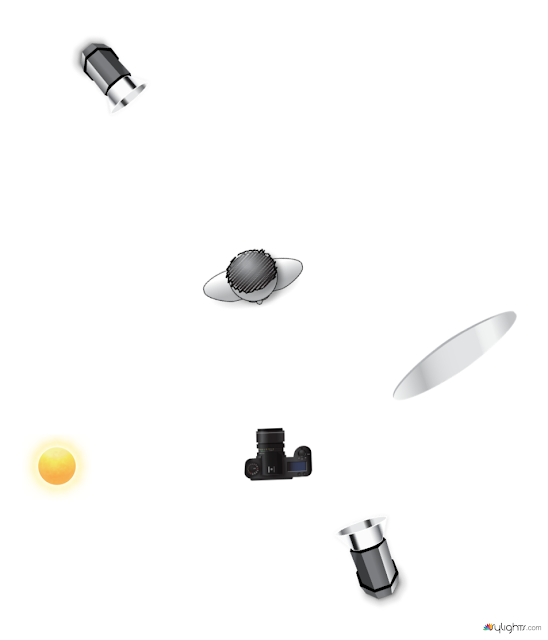 My assistant  and my self arrived at the Jamor training facility a little before 2:00pm after the morntihgs series at the other track . We sat around and waited  for about 4 hours to then get a chance to have some time with Francis .
I wanted to keep the images very dynamic but in a controlled manner .
So for this I used two Profoto Pro Heads with Zoom Reflectors on each side. There was allot going on in the background that was very distracting , so we tried shooting with a portable black collapsible background stand and  Iluminator  backdrop from WESTCOTT  . Making it easier to then work the image in post . I chose  a long lens  Canon 70 – 200 2.8 L for the running  shot , I also use the wide angle for the second portrait. I got down low and close to enhance the dramatics of the image . 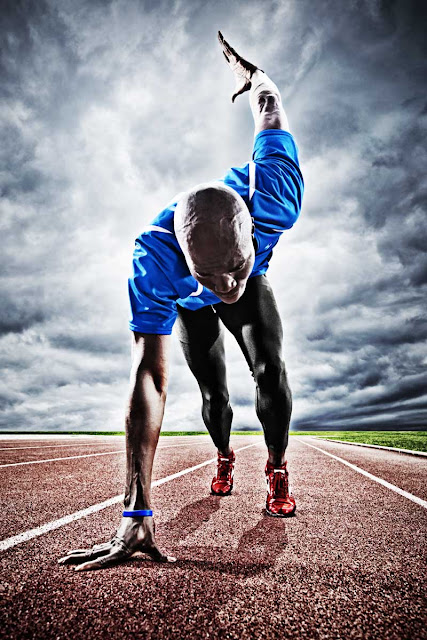 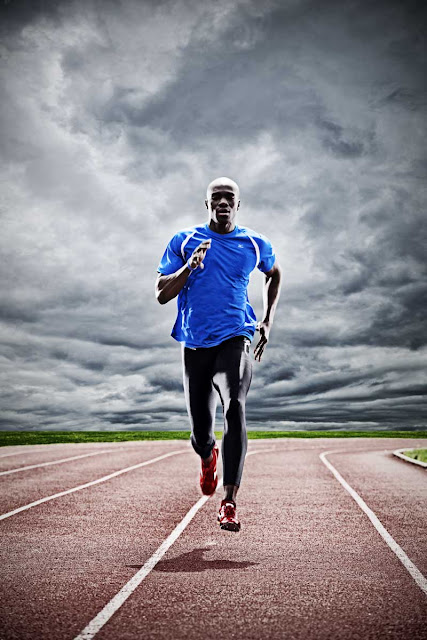 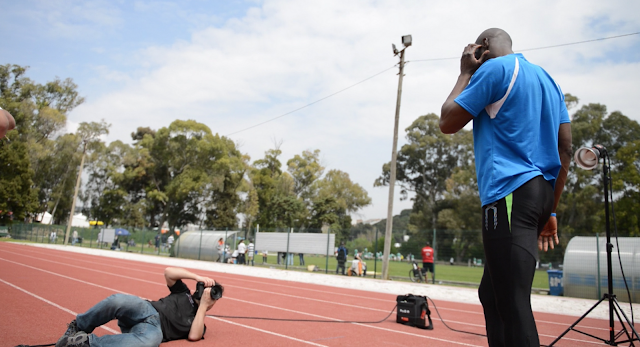 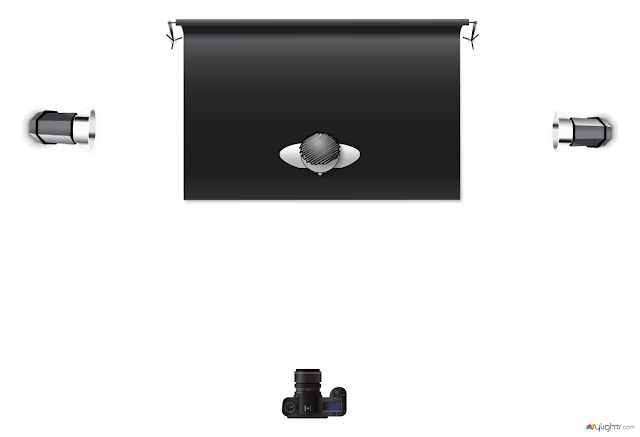