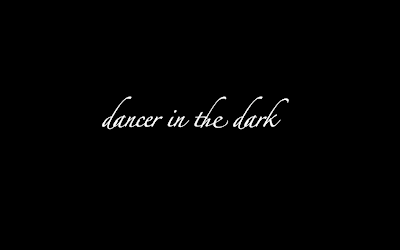 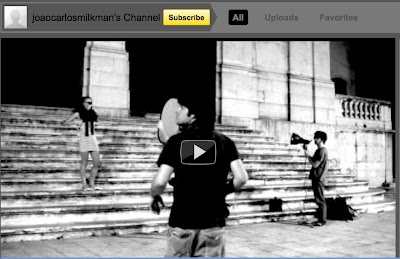 This is a personal series I have recently begun to explore; the human figure contrasting with architectural structures. I am primarily interested in achieving a sense of symbiotic fluidity between all the elements in the image: the model, the location, the stylistic elements and the differing textures of each. Sometimes you just don’t have a super huge team of hair, make-up, styling, and we shot this on location in the streets of Lisbon, Portugal with a teeny team consisting of me, the model Katy Cee and one assistant, my buddy Luis Salzedas. This was actually shot the night of my birthday! What better way to celebrate then shooting on location with my friends. 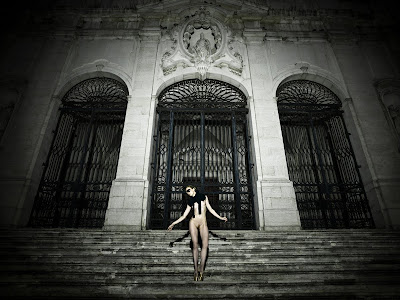 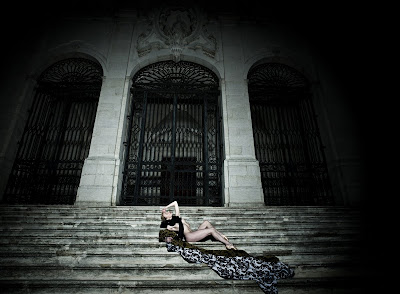 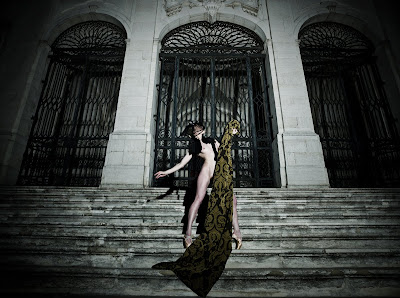 I kept the lighting simple but effective by using one single light with the standard light modifier. The Broncolor (A2R ) is so powerful that it illuminated the model, the entire facade of the church and picked up the detail in the backdrop textiles. I set the light about 3 feet above and behind my head, so to not create large shadows but to keep the sense of drama that this lighting setup naturally concocts. One of the potential issues that could be problematic with shooting at night is the lack of ambient light. Fortunately the modeling light is really powerful, which enabled quick and accurate focusing. The True Focus AF from my Hasselbald H4D 40 also helped with this issue and with keeping everything nice and sharp. The strobes fire consistently and recycle rapidly so I was able to capture the model’s movements in a spontaneous and fluid way.
Here is what’s in my Gear Bag:
Hasselblad H4D 80mm f/ 2.8 28mm f/2.8
Minolta Flashmeter IV Light meter
Broncolor Mobil Pack Mobilite (A2R) Pulso Adapter for Mobilite 2 Transmitter RFS ,standard reflector p70 .Westcott light stand and Five in one reflector by Westcott . Drop it Modern backdrops (x2) and off-course when I shoot directly to my Cf Cards I use Sandisk Extreme IV . The camera was hand held and set to: ISO: 200 1/125 s F stop: f/16

Colorfoto Challenge “Beauty is in the Light” – Lisboa